If you are keen on us helping you achieve your goals please contact your local branch for available opportunities.

Graeme began his career with Northland Waste in 2010. He learned the ropes of the operation by beginning as a runner in Warkworth. After running Graeme moved into the workshop in Warkworth where he broadened his skill set by learning valuable operational skills such as welding, sanding and general fleet maintenance. Graeme has trained new drivers and runners alike in the operation and has stepped up when needed by running both the Lawrie Road transfer station and the Warkworth branch when managers have been absent; “Basically I took advantage of any opportunities that presented themselves” says Graeme.

Northland Waste has provided Graeme with his class 2-4 Heavy Vehicle licenses, Wheels, Tracks and Rollers license, Forklift and a Dangerous Goods license. These have allowed Graeme to progress within Northland Waste by driving residential collection vehicles and operating both bulldozers and diggers within transfer stations.

Graeme is enjoying the experience he is gaining at Northland Waste and is looking to further his managerial experience. His plan is to one day run his own branch within the company. 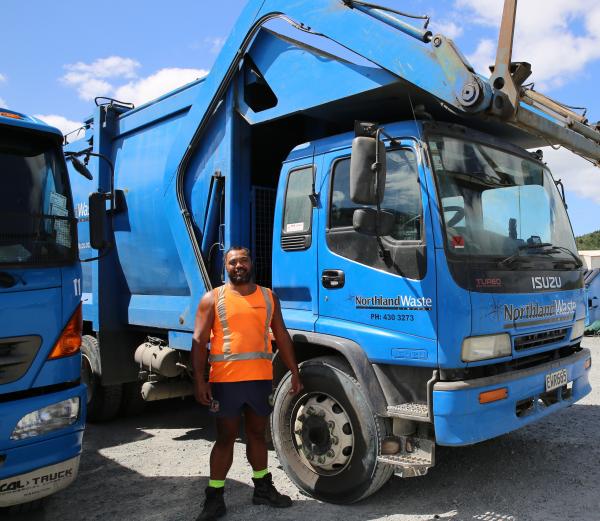 Kori Hui Hui or ‘Dosh’ as he is affectionately known began his career with Northland Waste in 2011. He started out as a runner in Whangarei. Dosh spent three and a half years mastering the art of kerbside recycling before injuring his shoulder. Once Dosh returned he gained a Class 2 license and was promoted to driving a residential collection vehicle. After just six months Dosh was again promoted to driving the Frontload vehicle used for commercial customers. Both Dosh’s Class 2 and Class 4 licenses were paid for by Northland Waste.